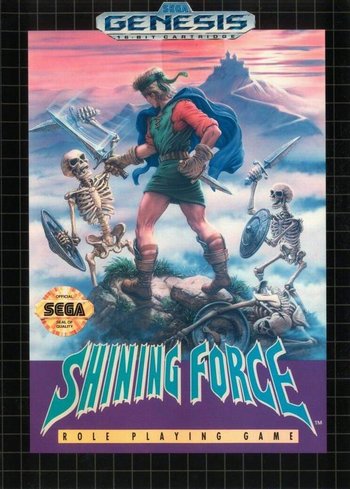 Shining Force (subtitled The Legacy of Great Intention on the title screen) is the first title in a series of turn-based strategy role-playing games, and is part of a larger franchise known simply as the Shining Series, and is considered Sega's answer to Fire Emblem by many.note Though the game's creator also claimed

that the game wasn't based off of Fire Emblem, whose pacing he claimed was so bad not even he wanted to play it. Instead, the series took cues from both Wizardry and Dragon Quest as well as an obscure PC88 RTS/Action/RPG hybrid called Silver Ghost.

Shining Force begins in the kingdom of Guardiana, where the main character, Max, is put in charge of the titular Shining Force and charged with stopping an invasion from the rival Runefaust army. The army is controlled by Darksol, a mysterious cloaked man with aspirations to revive the monstrous Dark Dragon and use it to Take Over the World. It's a prequel to the first-person Genesis RPG Shining in the Darkness, which featured Darksol's son Dark Sol (or, in Japan, Mephisto).

The game had a Game Boy Advance remake, now subtitled Resurrection of the Dark Dragon. published in 2004. It features enhanced graphics and sound and an extended story that involves new subplots and characters as well as tweaks to the mechanics to provide more balanced gameplay.

Its sequel, Shining Force II, was released in 1993 in Japan and 1994 elsewhere, but the story of the first Shining Force game is continued in the Shining Force Gaiden Games for the Sega Game Gear.