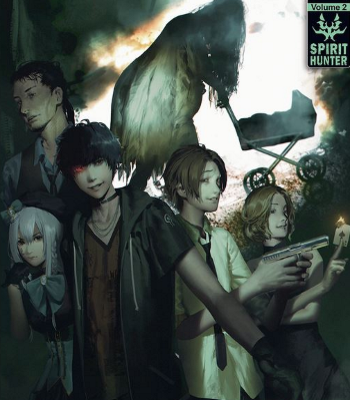 Spirit Hunter: NG (エヌジー Enujii) is a supernatural horror adventure game developed by Experience, Inc. for Steam, the Nintendo Switch, PlayStation 4, and Play Station Vita. It is the second game in Spirit Hunter series and the sequel to Spirit Hunter: Death Mark, but features a different cast and setting.

Set five years after the events of Death Mark, the story follows Akira Kijima, an orphaned teenage delinquent who lives with his aunt Natsumi, as he finds himself embroiled in the supernatural. Yuri Takamura, a friend of his younger cousin Ami, was supposedly killed in a hit-and-run, but he discovers the truth after a mysterious black postcard bearing a riddle is left at his apartment. Solving the riddle leads to an encounter with Kakuya, a fox-like spirit who kidnaps his cousin Ami and inflicts him with a curse, forcing him to investigate and pacify vengeful ghosts if he wants to continue living and rescue his cousin.

Helped along by his childhood friend- and Yakuza prince- Seiji Amanome, and gothic Idol Singer Kaoru Hazuki/Momo Kurusu, who was close to Yuri, alongside a variety of other colorful characters, Akira is forced to play Kakuya's twisted game.

The game has similar mechanics to Death Mark- each chapter, you tag along with a partner of your choice and explore a given area, gathering clues to decipher the plight of each spirit. Mixed in between are Crisis Choices, which work the same as the Live or Die choices of the first game- pick the right option from three options to survive. Each chapter ends with a Survival Escape, a boss fight against the spirit, though they work a little differently than the last game- here, you must choose between various spots on the battle field to use an item on, and there is no partner mechanic so only Akira can use items. As before, depending on what items you choose, you can either Destroy the spirit, leading to the death of your partner, or Purify it and have everyone survive- the ending you get depends on how many partners are still alive.

There are also two entirely new mechanics- the Judging system, where you can react to characters' statements with one of five emotions (neutral, happy, really happy, angry, and really angry) and influence how the character feels about you (though this does not affect the ending), and the D-Card search, a hide-and-seek game where you are challenged by the mysterious D-Man to find cards he has hidden in various areas, gaining background lore as a reward.

The game was first released in 2018 in Japan, then received an English localization in 2019.

Experience announced that the Spirit Hunter series will have another game as a spiritual sequel, known as Spirit Hunter Death Mark II, already crowdfunded under 15 million yen as of January 2020. It's set for a December 1, 2022 release on the PS4 and the Nintendo Switch in Japan/Asia and a worldwide release in 2023.

Warning: Due to its nature as a horror mystery, be wary of unmarked spoilers and gruesome descriptions.