A list of characters in the supernatural horror game Spirit Hunter: NG.

Warning: Due to the nature of the game, be wary of unmarked spoilers. Also, be warned that the folders can contain images of intense Body Horror. 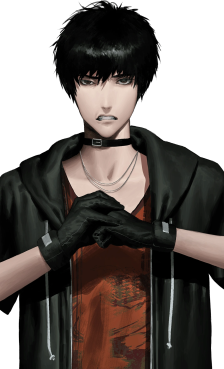 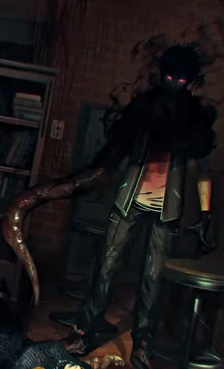 to see Akira in the Bad End
Voiced by: Yoshiaki Kawabata
"I don't need anyone to believe me. It's my problem. I'll take care of it."

The protagonist of the tale, Akira Kijima is a high school student-turned-underground fighter who's flung into the supernatural after his cousin is kidnapped by a mysterious spirit. 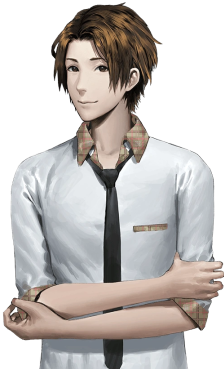 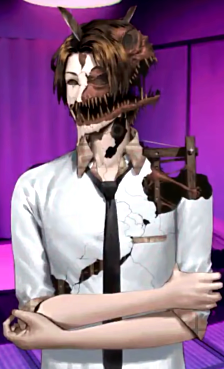 to see him in the Normal End while possessed by Kakuya
Voiced by: Tomohisa Sako
"A stranger's death dripping with danger and intrigue is a great source of entertainment."

Akira's best friend since elementary school and heir to the Amanome branch of the Yakuza. While he seems kind, his pretty face hides a twisted individual who loves to dig out people's secrets.

He's one of Akira's companions for the Urashima Woman and Kubitarou of Kintoki cases, and potentially one for the Demon Tsukuyomi case. 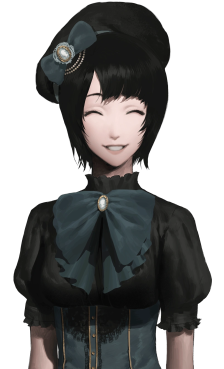 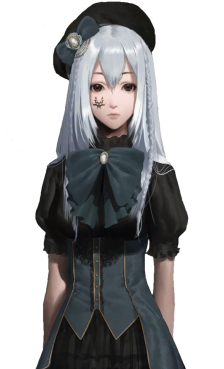 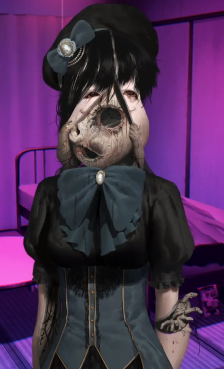 to see her in the Normal End while possessed by Kakuya
Voiced by: Yuubi Midorikawa
"Hehehe, Momo Kuruse is here. How's your guardian angel today?"

Momo Kuruse is an up-and-coming idol, her distinctive gothic style drawing her much attention and appeal. Her true identity is Kaoru Hazuki, an occult fanatic who gets pulled into the story due to being friends with Akira's cousin.

She's one of Akira's companions for the Urashima Woman and Kubitarou of Kintoki cases, and potentially one for the Demon Tsukuyomi case. 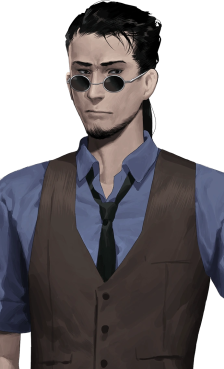 [Class] Journalist Lv55
Voiced by: Taiki Yamashita
"Each and every spirit is hiding some dark truth underneath all its artifices. I guess I'm just helplessly drawn to uncovering those truths."

A shrewd journalist infamous for his backdoor dealings and coercive methods. Despite his earned reputation, he's skilled at journalism. Also hopelessly addicted to gambling.

He's one of Akira's companions for the Screaming Author and Killer Peach cases. 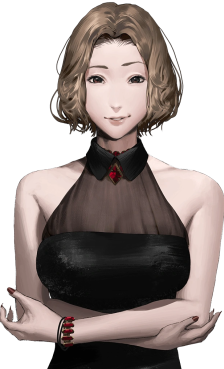 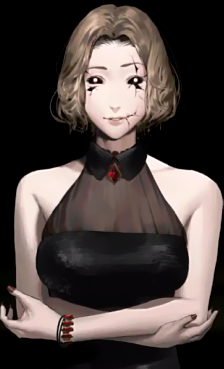 to see Rosé's true form in the Bad End
Voiced by: Eri Tomizawa
"I might not kowtow to society's norms, but I draw the line at stealing top-shelf alcohol."

A stage magician and supernatural savant who was hired alongside Ban to investigate the supernatural. Little is known about her, and what she does divulge only brings up more questions than answers.

She's one of Akira's companions for the Screaming Author and Killer Peach cases. 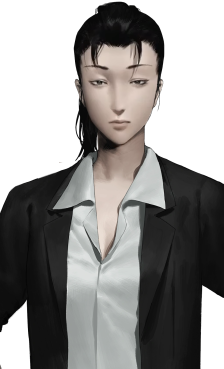 A tough detective hailing from Kansai, Ooe has a strong sense of justice that she doesn't let any rules or regulations get in the way of. While initially an obstacle, she eventually gets on the same page as Akira and helps him with his investigations.

She accompanies Akira and his companion(s) during the Killer Peach and Demon Tsukuyomi cases. 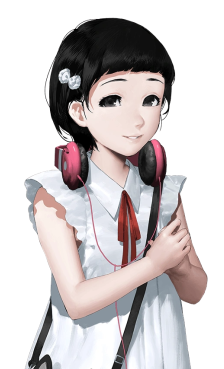 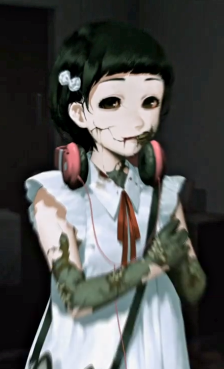 to see Ami possessed by Kakuya
Voiced by: Erika Ishitobi
"If I were all alone, I probably would've cried. But I have you, so I'm okay."

Akira's young cousin, who treats him more like an older brother. Sweet, caring, and loved by many who meet her. She's kidnapped by Kakuya at the start of NG, which kicks off the plot. 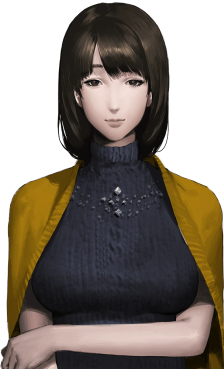 [Class] Writer LV40
Voiced by: Yuubi Midorikawa
"I want to do all I can for the regulars who tell me how much the bar feels like home."

Akira's aunt, and Ami's mother. Her motherly nature hides a steely resolve. While she owns a bar, it plays second gig to her true occupation as a horror novelist. 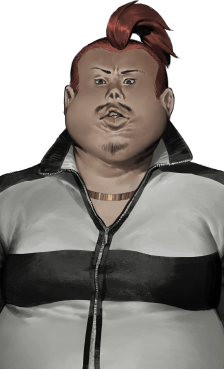 [Class] Thug LV13
Voiced by: Taiki Yamashita
"I was about to cut off a finger to prove my sincerity, but... Mister Seiji said that there was no point in offering a dirty finger, so he stopped me."

A young member of the Yakuza who serves under Seiji. Despite his posturing, he's actually quite buffoonish. He proves to be an informative asset during the Kubitarou of Kintoki case. 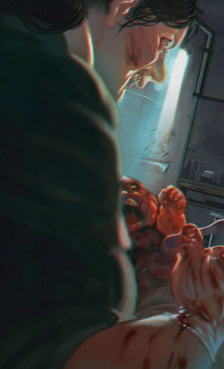 "Dear me, what a noisy mother. Well then, we'll just have to quiet her down first..."
The midwife who killed the Urashima Woman and made off with her child.
Yakumo Miroku 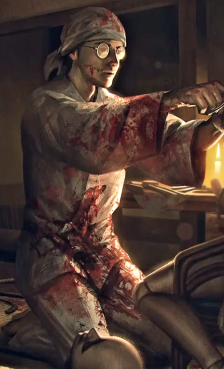 A celebrated author of children's horror literature, though his true nature is a lot more complex - and a lot more bloody - than that. Rumoured to be the Screaming Author, though again the truth isn't what it seems.

Akira's mother. She died two years prior to NG, hence why Akira moved in with his aunt and younger cousin.

"Spirits are distinguished by how they feed off of fear. They drive humans to the brink of death, and soak them in fear and despair. That is their wish."

The antagonists of the tale. Each chapter, Akira and his companions must work to investigate a spirit, discovering its history and weaknesses in order to pacify it... or otherwise destroy it. 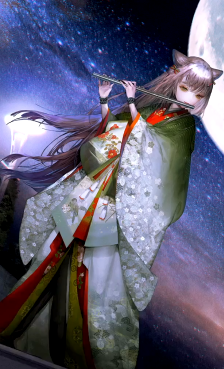 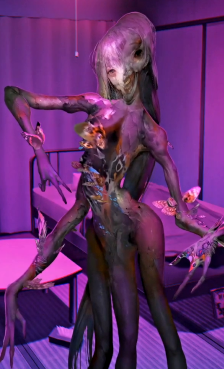 to see her final form
Voiced by: Erika Ishitobi
"You have to play with Kakuya. We'll play forever and ever."

A girlish doll who serves as the Big Bad of the story. She kidnaps Ami in order to force Akira into playing her game, with death awaiting if he ever loses. 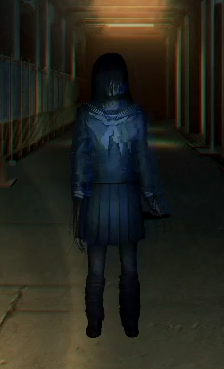 A friendly girl who used to be acquainted with Ami and Kaoru, before she met her end at Kakuya's hands. She returns as the first spirit that Akira must face against. 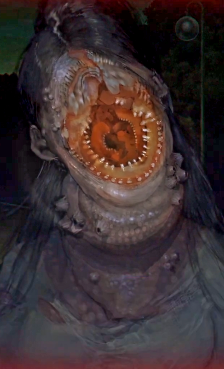 A spirit rumoured to drown those who throw a rock into Urashima Lake. She appears as a pregnant woman, calling out for her baby. 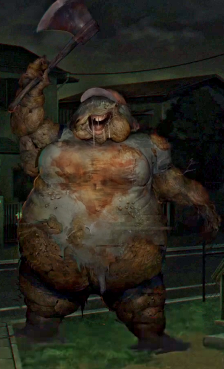 A giant spirit that decapitates animals to collect their heads, and is rumoured to do the same to humans. Appears as a behemoth with a gleaming axe, all the better to chop heads with. 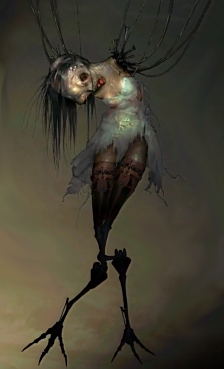 A spirit that resides in Miroku Mansion. Its screams are rumoured to cause insanity and death upon those who hear them. 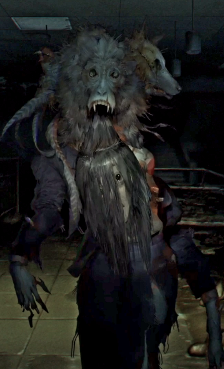 A feminine spirit that appears with multiple heads and a katana, murdering various men who work at the Sumii Group. She earned her name due to her animal heads matching the ones found in Momotaro's (Peach Boy) tale. 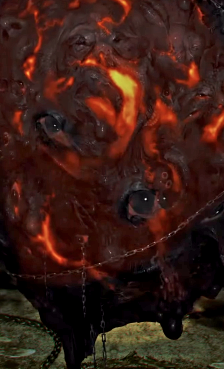 A spirit that's rumoured to grant the wish of those who burn an offering for it. 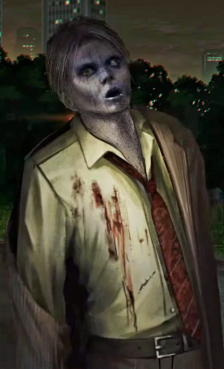 A mysterious man who leaves cards around the city for Akira to find. Is highly knowledgeable about various spirits, and has some sort of connection to the characters from Death Mark.