Appearance Is in the Eye of the Beholder 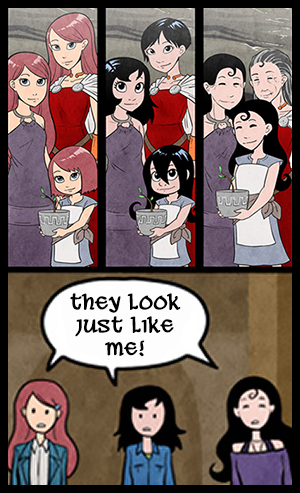 Some characters Lie to the Beholder, appearing selectively different to one or two people than they appear to anyone else.

Other characters appear differently to anybody who sees them. One man will view them as a tall blonde woman, where another will see a short black man. Obviously, this makes tracking the character down by description difficult. Such an ability is almost always mystical in nature, although scientific or pseudoscientific explanations like "psychic resonance" or "nanotechnology" are often used in science-fiction settings. Keep in mind that when Appearance Is In The Eye of The Beholder, that means that the entity involved looks different to multiple people at the same time.

A common variant of this in settings with multiple species is to have an entity which appears different depending on the species of the beholder, most often as a member of the same species.

A Form You Are Comfortable With and You Cannot Grasp the True Form are often forms of this. Compare Lie to the Beholder, which generally causes the same illusion to all affected viewers. Compare an Empathic Shapeshifter, who physically changes, while this trope is more often an illusion. Often employed by a Master of Illusion.

Xigbar starts to see 'poppet' as someone from his past...

Xigbar starts to see 'poppet' as someone from his past...