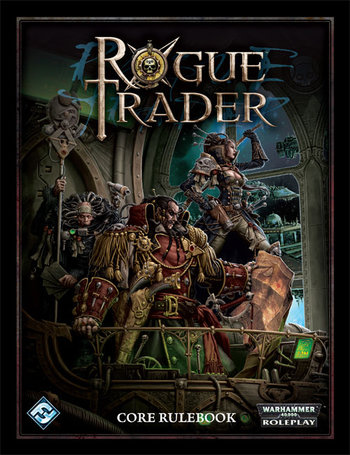 For the original Rogue Trader, see Warhammer 40,000; this article is for the 2009 Tabletop RPG.

Rogue Trader is the second of a series of Warhammer 40,000 tabletop roleplaying games. While its sister game Dark Heresy casts the players in the role of Inquisitorial Acolytes and focuses on themes of corruption and conspiracy, Rogue Trader is a game of exploration, adventure, and the horrors of the unknown, following one of the eponymous Rogue Traders and his crew as they explore the uncharted depths of space for gold, glory and the God-Emperor. Something like a Darker and Edgier Star Trek — or, as some put it, Mirror Universe Star Trek.