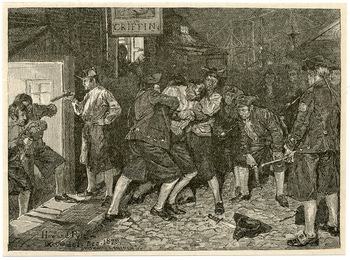 The Press-Gang in New York, Howard Pyle, 1882
OI, YOUS LOT! You'z part of my krew now! Any problems with dat, ya can talk to da complaints department. Dat's my gun, by da way!
— Kaptin Bludflagg, Dawn of War: Retribution
Advertisement:

In fiction, if a brazen organization has a position they need filled, rather than putting out a want ad or interviewing potential candidates, they'll simply grab the first person they see and force them to help.

Though this is usually played for comedy, it was used seriously by Real Life navies; however the British practice of impressment

existed only in wartime, it was in theory actually limited to seamennote "Men of seafaring habits" - i.e. merchant seamen, fishermen and even longshoremen and riverboat crewmen. either in British ports, by the Impressment Service "press-gangs" or from homebound British merchant vessels, by individual Royal Navy ships (as in, crewmen from merchant ships were conscripted into the Navy) and some categories of them were completely exempted, such as officers of the merchantmen. However in practice on occasion even landsmen

were pressed. Sometimes in time of crisis the Admiralty resorted to "hot presses", disregarding any exemptions.

To a limited extent, the impressment was also used by the Continental Navy of the nascent United States.

The practice of "shanghaiing" by non-military vessels in need of able-bodied men closely resembles the concept of impressment, though it is completely illegal.

See also Got Volunteered, which does not (necessarily) involve the use of force, and Conscription, in which compulsory service is obtained via formal legal channels rather than ad-hoc abduction.