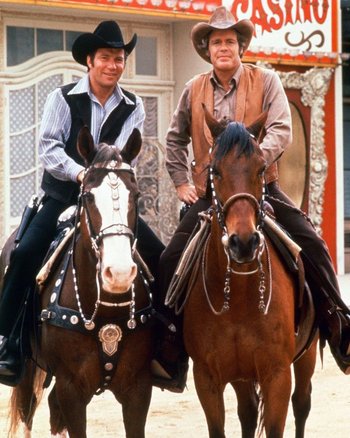 Barbary Coast is an American television series starring William Shatner and Doug McClure that aired on ABC. The pilot film first aired on May 4, 1975 and the series itself premiered September 8, 1975note the week after Gunsmoke ended its then-record 20-year run; the last episode aired January 9, 1976.

19th-century government agent and master of disguise Jeff Cable operates out of a secret room in a San Francisco casino owned by his best pal Cash Conover. Conover is sort of a dandy, and would rather avoid trouble at all costs, but Cable's persuasiveness coupled with Cash's sense of duty and a weakness for the fairer sex shared by both men usually leads them into dangerous missions.