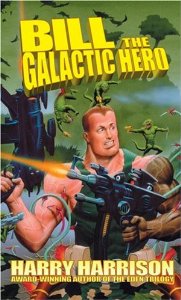 In the distant future, when mankind has spread out to the stars, a farmboy named Bill from a backwater planet makes a split-second decision that changes his life, along with the course of the galactic empire, by sort of technically volunteering to enlist in the military, right on the cusp of a war with alien space lizards called the Chingers. As an enlisted man, Bill (or Bil, since only officers are allowed have two L's) goes through a Training from Hell under Drill Sergeant Deathwish Drang, known for his temper and his pair of enormous surgically implanted fangs.
Advertisement:

It's during training Bill first meets Bgr, the former Chinger ambassador to the empire, at the time hiding inside a very obvious Mobile-Suit Human, under the name of Private "Eager" Beager. Bill has little time to ponder that his best friend was an alien spy as he is soon sent into battle against the Chingers, along with Deathwish Drang and new bunkmate Tembo who Bill ultimately gets much closer to than he would wish.

As one of the few survivors of the battle that ensues, Bill inherits his late drill sergeant's fangs and has his left arm, which was lost in the chaos, replaced with the right arm of Tembo, making him the only soldier able to salute with both hands at once.

Touted as a hero of the Empire, Bill is rewarded by the Emperor. That is, until he loses his pants and accidentally joins The Resistance, causing him to be punished by being deployed to a Death World in order to heroically die in combat. Knowing that the front is short on certain spare body parts, Bill escapes death by blowing off his own right foot and being sent offworld to be patched up. The replacement foot is less than satisfactory.

Such is the origin of Bill the Galactic Hero by Harry Harrison, of whose exploits are the stuff of legend.

The books in the series are as follows: