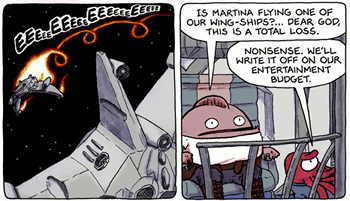 Nogg: This is the bridge of the I.A. Star Banger. As you can see, you are now in outer-space.
Dustin: A spaceship in space. You aliens are just full of surprises, aren't you?
Advertisement:

) is a science fiction webcomic by Christopher Baldwin, creator of Bruno, Little Dee, and One Way.

Six humans from six continents get knocked out and abducted by a fish-like alien named Nogg. When they wake up aboard his ship, Nogg explains that he's shanghaied them into Interplanet Amity—a galactic activist group aiming to end the exploitation of the Eebs. It won't be easy: the Eebs are the only species capable of understanding and building the technology on which the entire galaxy depends, so attempting to liberate them will quite literally tick off every single government in the Galactic Organizational Body.

In spite of the odds, five of the humans agree to fight the good fight for their own reasons... and the sixth sort of tags along anyway.

Hilarity Ensues. As does some darker stuff.

The comic wrapped up its story in December 2013. But, after working on other comics for a few years, Baldwin returned to the Spacetrawler universe to begin a new story in August 2016. This time, Nogg and a brand-new crew of kidnapped humans get drawn into a war between dark planets.

Part two wrapped up in September 2019, but a new story began in October 2019. Emily, while trying to avoid galactic politics, ends up accidentally rescuing a young girl from an alien plot on Earth.