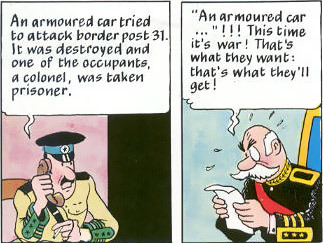 The leaders of Viridia and Tyria want to go to war. Not for a silly reason, but due to anything from good old fashioned jingoism, greed, political/economic/religious differences, or a simple historical grudge. However, they can't just out and out declare war, that would be uncivilized! And more importantly, it would make them look bad to the international community, which isn't good politics. So instead they will wait for or manufacture a Pretext for War out of whatever should come their way.

Did a Tyrian pig farmer lose a pig when it wandered into Viridia? This Means War! Maybe a Viridian girl disappeared near the Tyrian border? Tyrian slavers must want to capture Viridian women since theirs are so ugly! A favorite is for Star-Crossed Lovers from both sides (preferably royalty) to elope, causing both sides to assume the other kidnapped their heir.

One interesting and ironic variant is when hardline elements from both sides will collaborate to stage a high profile assassination or other incident to kickstart a war, proving just how well they work together to achieve their goals despite hating each other's guts. This one is especially common when one or both nations have a Reasonable Authority Figure as a head of state, since it can force their hand to war, or if they're the assassination target, get them out of the picture and make them an unwitting martyr. False Flag Operation is one of the classical moves too, and almost a Twentieth Century theme song.

Point is, an incident any two sane heads of state would quietly defuse is treated as a Rage-Breaking Point in order to start the war. In these cases, heroes typically have to uncover the plot in order to Prevent the War.

A technical term for this is the Latin term Casus Belli, or case for war.

Since wars of aggression

have technically been banned, you'll find that these are a lot more common today than they were previously, since both sides are at pains to show that the other side started it. As a result, the history of many a 20th-century war reads like a really, really dark Idiot "Fawlty Towers" Plot. Mind you, "civilized" countries have more or less always deemed it improper to declare war on your neighbors "because we want your stuff" or "because we feel like it"note With the exception of Sparta, which freely admitted that it would go to war "because we have nobody else to fight right now." or even "because we're afraid of you"; even an aggressive war would have to have some kind of triggering incursion, insult, or violation behind it. (Look up how each of the three Punic Wars got started — the pretexts are hilariously flimsy.)