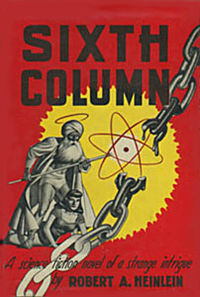 Sixth Column is a Science Fiction novel by Robert A. Heinlein, first serialized in 1941 and published as a book in 1949.
Advertisement:

Sixth Column (aka The Day After Tomorrow) tells the story of six surviving US soldiers after Pan-Asian invaders conquer America. Having recently invented a Doomsday Device that confers its wielder powers not much unlike omnipotence, the surviving Americans begin plotting to free their country using this new technology.

Complications arise as they realize how fickle the PanAsians are and how easily they resort to executing captive Americans. To avoid unnecessary loss of life, the Americans decide to set up a fake religion to take advantage of the only freedom given to American people anymore, and start working covertly to overthrow the Asian rule.