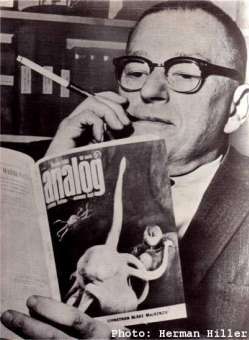 John W. Campbell, Jr. (June 8, 1910 – July 11, 1971) was an American science fiction writer and editor. As editor of Astounding Science Fiction magazine for over thirty years, he was one of the most influential figures in the Golden Age of Science Fiction.

As a writer, the bulk of his work was done in the 1930s. He first made his name as an author of Science Hero Space Opera, including the 'Arcot, Morey and Wade' stories, which were collected in book form in the 1950s. He also wrote more thoughtful science fiction under the name Don A. Stuart, including the linked stories "Twilight" and "Night", and "Who Goes There?", the story that inspired the films The Thing from Another World and The Thing (1982). It was originally written as Frozen Hell, a full novel, but Campbell cut it down and renamed it for publication.

He became the editor of Astounding Science Fiction magazine in 1938, and remained in that post until his death. During his tenure, he fostered the careers of many now-famous writers, including Isaac Asimov, who credited him with formulating the Three Laws of Robotics.

His primary influence was that, as editor, he demanded good stories with good science. He inarguably did more to pull SF out of the age of pulp than anyone else. On the other hand, he was not known for his tolerance. Asimov himself testified that Campbell felt that Northern European men were the pinnacle of humanity, and Campbell accepted precious few stories where the hero was identifiably not a Northern European man. He accepted none where any alien race is superior to humanity in a meaningful way. His definition of "good science" was also pretty much limited to "good physics and chemistry"; when it was proven that smoking caused cancer, he pooh-poohed the results, and continued wielding his distinctive cigarette holder until he died of cancer. By the 1960s, he was also deeply into pseudoscience like the Dean Drive and Dianetics. He remains a controversial figure.

There have been two significant awards established in his honour, the John W. Campbell Memorial Award for Best Science Fiction Novel and the John W. Campbell Award for Best New Writer. The latter, which is not technically a Hugo Award, but is presented at the same annual award ceremony, was subsequently renamed the Astounding Award For Best New Writer by the sponsor, Analog Magazine, in recognition of the more problematic aspects of Campbell's personality and history, with the first award under the new name being presented in 2020. The sponsors of the former have also announced that they intend to rename the award, but have not yet decided on the new name. Interest in his work continues, considering that when the original manuscript for Frozen Hell was found, it was published after fans initiated a highly successful Kickstarter.

Works by John W. Campbell with their own trope pages include:

Campbell's other works provide examples of: