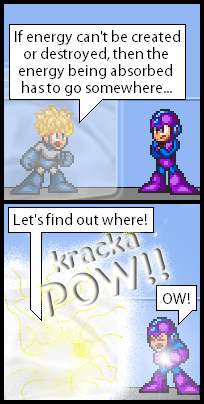 "I will build machines which simply fail when overloaded, rather than wipe out all nearby henchmen in an explosion or worse yet set off a chain reaction. I will do this by using devices known as 'surge protectors'."
— #225 on The Evil Overlord List
Advertisement:

A popular strategy to destroy the Big Bad's big doomsday device is to overwork it until it blows up. Overclocking any Applied Phlebotinum, especially the evil kind, won't just shut it down but will cause it to explode beyond repair. But in this case, the "explosive" part of Explosive Overclocking is not the risk but the goal. Then your job is done, since, of course, there are No Plans, No Prototype, No Backup.

A common way to achieve this seems to be to hit every button and pull every lever within reach as fast as you can.

The idea could be connected to how a computer will "crash" (that is to say, shut down or freeze) if you try to run too many applications at once. Of course, in the real world, a computer crash is very different from a car crash, and a computer - or any machine, really - is very unlikely to explode when it crashes. A closer analogy might be how a fuse will blow from using too much electricity on one circuit, but we have precautions to take for that in the real world. You'd think the Big Bad would be smart enough to take the same precautions for his weapons, but then destroying them wouldn't look half as cool.

Sometimes given a Hand Wave involving some Technobabble about "overriding the safety protocols" (which will usually entail typing the word 'override' into a nearby console, and if that doesn't work, typing it harder).

The opposite of Tim Taylor Technology. Goes hand-in-hand with Destruction Equals Off-Switch. Compare Logic Bomb and Going to Give It More Energy. Compare and contrast Pent-Up Power Peril when the lack of usage creates similar results. Next step up from Self-Destruct Mechanism.

Not to be confused with Overcranking an Attack Shot, a.k.a. "Snyder-vision".

which increases processing speed at the cost of lifespan (although too much overclocking can achieve the same result as this trope).