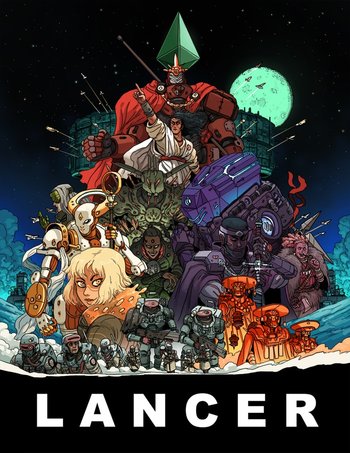 A mud-and-lasers RPG about mechs and the pilots who crew them.
Advertisement:

is a "mud-and-lasers" RPG about mechs and the pilots who crew them, featuring deep narrative play, gritty tactical combat and broad customization. Written by Miguel Lopez and by Tom Parkinson Morgan, who being known for his work on Kill Six Billion Demons also provides art.

Ten thousand years after the climate crash that ended the Anthropocene, a survivor humanity rebuilt itself and spread to the stars. Numbering now in the trillions, they are a polyglot, cosmopolitan people, organized under a Union. The galaxy is vast before them, and humanity is its mirror. For some, it is a golden age of post-scarcity utopia. For the rest, that golden age remains a dream to be attained.

The players take on the role of Lancers, mech pilots licensed by the Big Five manufacturing corporations, and contracted to any number of causes, whether it be fighting for Union to rectify crimes of previous administrations, or taking on mercenary work for corporate-states and Warlords.

Mechanically speaking, the out-of-mech action is narratively fluid. The meat of the game comes from the Mech Piloting mechanics, with deep customization per individual mech, and each one with unique abilities that allows the player to mix and match to their liking.

Lancer was successfully Kickstarted in May 2019

after making nearly 10 times its Kickstarter goal. The Core Rule Book was fully released in late November and continues to be updated with errata; more supplementary content is planned for release in 2020.