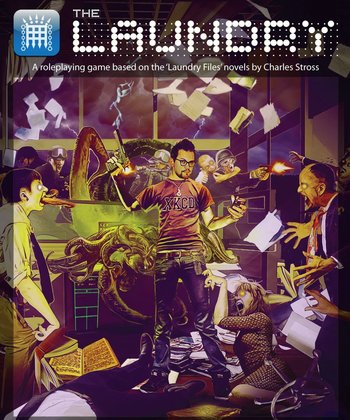 The Laundry is an Tabletop RPG based on The Laundry Files series published by Cubicle 7. Players take on the roles of British agents working for The Laundry, a secret agency tasked with protecting the world from the horrors of Cthulhu Mythos and other supernatural threats while wading through bureaucratic red tape.

The Laundry uses a variant of the Basic Role Playing System used by Call of Cthulhu and its own Lovecraftian spy setting, Delta Green. Other spy/Lovecraft settings for CoC include Achtung Cthulhu from Modiphius Entertainment and World War Cthulhu from Cubicle 7.

The RPG contains examples of: