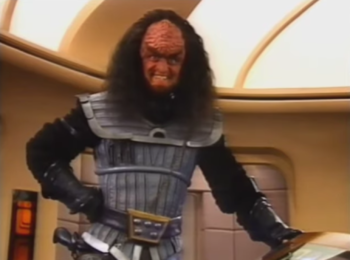 The USS Enterprise-D has docked at Starbase 74 in order to repair the ship's computer core, since it's been having strange low-level errors lately. While the ship is undergoing repairs, almost all of the crew and civilians aboard have left for shore leave, with only a small engineering crew (the players) aboard. A Klingon warrior by the name of Kavok takes advantage of the situation, beams aboard the near-deserted ship, then takes control of it and sets course for Qo'noS, the Klingon homeworld. As it turns out, Kavok is a little ornery about the peace between the Federation and Klingons, and yearns for the good old days when they were trying to brutally kill each other; consequently, he intends to destroy the peace treaty by having the ''Enterprise'' launch an attack on the Klingon homeworld.

Fortunately, for those still aboard the Enterprise, Kavok is willing to play a "warrior's game," and will surrender if the players can earn the five security levels (represented by isolinear chips) necessary to access the bridge, acquire a hand phaser, and stun him. However, he's also determined to make your job as hard as possible, and will try to hinder you by trapping you in stasis fields, screwing around with the ship's systems, and inflicting bIj (Klingon for 'punishment') on the players.