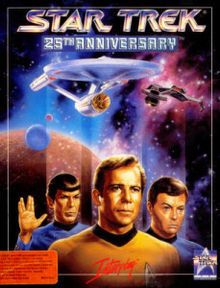 Boldly go there yourself.
Advertisement:

There have been many Star Trek video games produced over the years. These games are all considered to be part of the Star Trek Expanded Universe and not canon with the main series but have often been referenced in other media such as the novels or each other. Quite a few of the games have the likenesses and voice actors of the series that they adapt.

Star Trek has been notoriously variable with the quality of its forays into interactive entertainment - partially because distilling the essence of the best episodes of the series into a truly interactive format is goddamn hard. The "best" Trek games to date have been somewhat more combat-focused than many of the shows really were. Of course, the fact that the license keeps bouncing between hands and developers (unlike LucasArts, who've been refining their Star Wars offerings for the better part of two decades now) has not helped matters in the slightest.

The two genres which are widely considered to have been most adaptable are strategy games (Star Trek: Bridge Commander, Star Trek: Armada, et al) for the combat elements, and point and click adventures (Star Trek: 25th Anniversary, Judgment Rites, A Final Unity) for their episodic nature and ability to explore some of Trek's more ponderous aspects. 25th Anniversary and A Final Unity in particular are often held up as being the closest you can get to actually playing interactive episodes of their respective television series, complete with the complete original casts providing the in-game voices of their characters (which helps a lot with the atmosphere).

Please Note that the following is NOT a complete list of every Star Trek game out there, because there are A LOT

These games contain the following tropes: