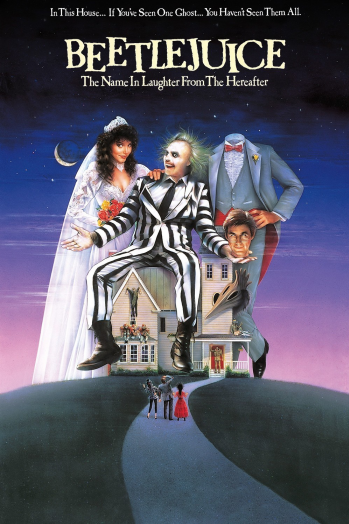 Jump in the line, rock your body in time! Okay, I believe you!
"It's showtime!"
Advertisement:

The story follows Barbara and Adam Maitland, a loving young couple who die in a car accident and find themselves caught in the Celestial Bureaucracy of the afterlife. Unable to move on, they haunt their rustic Connecticut home until it's bought by Charles and Delia Deetz, an insufferable yuppie couple with a goth daughter, Lydia. Wishing to rid themselves of the Deetzes, they enlist the help of a malevolent ghost named Betelgeuse (pronounced Beetlejuice) to drive them out. But between Betelgeuse’s unwillingness to play fair and the increasingly strong bond between Lydia and the Maitlands, who come to see her as the daughter they never got to have, things go off the rails quickly, and Hilarity Ensues.

The film is remembered for its dark humor and inventive visuals, helping to make Burton a household name. The score by Danny Elfman and a memorable musical sequence set to Harry Belafonte's "Day-O (The Banana Boat Song)" also brought renewed attention to both performers.

In the years since its release, Beetlejuice spawned an early 90s animated series of the same name on ABC and Fox Kids bearing only a loose resemblance to the film, and a theatrical production that commenced in 2018. A sequel has long languished in Development Hell.

Betelgeuse (pronounced "Beetlejuice") was once a part of the afterlife's bureaucracy before going "free-lance." He makes deals with unsuspecting people like the Maitlands and Lydia, reaping fear and chaos wherever he is summoned.

Betelgeuse (pronounced "Beetlejuice") was once a part of the afterlife's bureaucracy before going "free-lance." He makes deals with unsuspecting people like the Maitlands and Lydia, reaping fear and chaos wherever he is summoned.