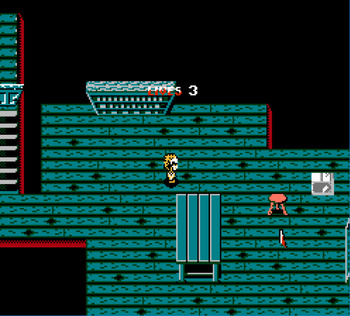 The Beetlejuice franchise included two video games - one for the Nintendo Entertainment System, one for the Game Boy. Both are titled Beetlejuice, and they were both developed by Rare and published by LJN Toys. There was also an MS-DOS game, Skeletons in the Closet, based on the cartoon episode of the same name; this was developed by Riedal Software Productions and published by Hi-Tech Expressions.

open/close all folders
The NES game 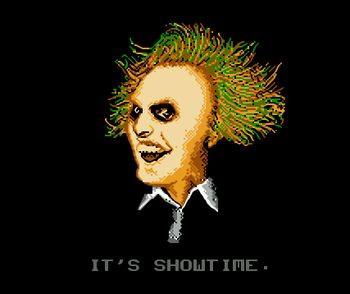 The NES game, released in 1991, is based on the film and is a notoriously difficult eight-level platformer. The player takes on the role of Betelgeusenote though his name is spelled as "Beetlejuice" here, who is attempting to scare the Deetz family and their friends out of the Maitland house. This is done by exploring the house and nearby area, stomping on insects, and acquiring special scare techniques to use on the various enemies. However, the scares do not work on the characters he's actually attempting to drive away; he must get Charles, Delia, Lydia, Otho, Adam, and Barbara to stop blocking his path by finding and using specific items on them. Early levels are based on the film, although later levels are original content.

The Angry Video Game Nerd had fits over this game.

The Game Boy Beetlejuice game was released in 1992. It's based on the cartoon, and carries the subtitle of Horrific Hijinx From the Neitherworld. Unlike the NES game, this one was generally well-received.

Lydia's house is filled with assorted ghosts who need to be removed, and only Beetlejuice has the power to evict them; of course, it's also his fault that they're there in the first place. The player must guide him through five levels of various insanity throughout the Deetz household and the nearby town to accomplish this goal. But the final boss, Astaroth, takes Lydia prisoner and the game turns into a rescue mission.