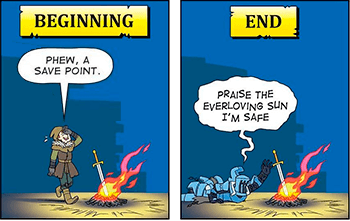 DAMMIT I JUST WANT TO FIND A SAVE POINT SO I CAN GET TO BED
— Cracked.com, "The 7 Commandments All Video Games Should Obey

Check-Point Starvation occurs when in a Video Game, the player must go for an extended period of time without Check Points or Save Points. Its purpose, when done intentionally, is to add difficulty to the game.

In the most extreme cases, the player may be required to beat the entire game with one life, though going that far with this trope is mostly unheard of. Outside of Roguelikes, one-life marathon games are almost exclusive to the 8-bit era, and even then it was pretty uncommon — except as a Self-Imposed Challenge or the highest difficulty level.

This can occasionally slip in very story-heavy games, possibly by accident. It's particularly common in the introduction for the game, as Exposition can be interspersed with tutorials or gameplay without a save function.

Not to be confused with Save-Game Limits, when the game imposes limits on when and where (and how) you can save the game, though these two sometimes overlap. Use of the Suspend Save in particular allows a developer to enforce Checkpoint Starvation while still allowing the player to take breaks, by creating temporary save points that will get deleted upon resumption.

Compare Respawn Point, Marathon Level, Marathon Boss, Final Death Mode, and Point of No Continues. Contrast Death Is a Slap on the Wrist and Respawn on the Spot. Often causes poopsocking.

Alternative Title(s): Start To Save