Video Game / Beneath a Steel Sky 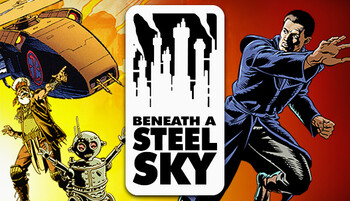 "Marvellous! I get kidnapped, nearly killed in a 'copter crash, hunted by professional thugs... and I'm stuck with a ROBOT in a SULK!"
— Robert Foster, exchanging angry words with his belligerent robot Joey
Advertisement:

Beneath a Steel Sky is a British Point-and-Click video game created by Revolution Software. The game was released for PC DOS and Amiga platforms in 1994. It came in two basic versions for both of those platforms: a text-heavy disk-based affair with minimal sound effects and a more lavish CD-ROM production with full music and speech, the latter of which was unusual considering the limitations of most computer systems of the era. The artwork and general style was partially created by Dave Gibbons, whose illustrations grace the PC CD-ROM version's introduction video, with the subtitles using comic-book style EMPHASIS on KEYWORDS.

The player controls a character called Rob Foster. Rob was rescued by a tribe of bandits as a child after he was found as the only surviving member of a helicopter crash, on which his mother was also a passenger. He is raised by the tribe and comes to look upon them as his family, learning skills such as hunting and building himself a robot from discarded scraps found in local garbage dumps. They inhabit a barren wasteland known as "The Gap", a deserted area that was once part of the Australian outback, a harsh place where daily survival is a struggle.

They are brutally set upon by a team of Security agents from Union City, a sprawling metropolis with millions of inhabitants, looking for someone named Overmann. After kidnapping Foster, destroying his robot's shell, and setting off in a helicopter, the leader of the forces gives the order to detonate an explosive, wiping out both the tribe and the land on which they lived. Overcome with emotion, Foster is restrained by the guards as they make their way back to the city. Without warning, the chopper spins out of control and crashes in Union City's industrial district, killing the pilot and all the passengers but two: Foster and an over-zealous Security agent named Reich. Climbing from the wreckage, he retreats to a nearby factory amidst a hail of laser fire. Reich proceeds to hunt him down, all the while referring to him as Overmann.

Union City, the "steel sky" of the title, is a classic dystopian cyberpunk setting full of selfish, morally flexible, and hilarious characters who don't much care for Rob, Joey, and their unusual ways. Staying undercover and stealing anything of use, Rob endeavours to resurrect his robot companion, find a way out of the city, and find the mysterious Overmann, who somehow seems connected to the supercomputer that forms the backbone of their society, known simply as LINC.

Beneath a Steel Sky was very well received upon release, with particular praise directed at the stylish graphics and darkly humourous off-kilter dialogue. Nevertheless, it failed to reach a larger audience and remains something of a forgotten gem, although Revolution Software commendably made it freeware to coincide with ScummVM

porting the game using its custom engine, which means it can now be played on a variety of platforms. A "Remastered" edition was released for the iPhone in September 2009, which fixes some of the minor issues with the original game, features an intuitive new interface and an improved musical score.

Revolution have several times voiced their intention to make a sequel, and have announced that they're working on it. In March 25th 2019, the sequel, Beyond A Steel Sky, was revealed, adopting a cel-shaded 3D look. The game was released on 26 June 2020 on the Apple Arcade, with a Steam release planned for a later date.