Video Game / Beyond a Steel Sky 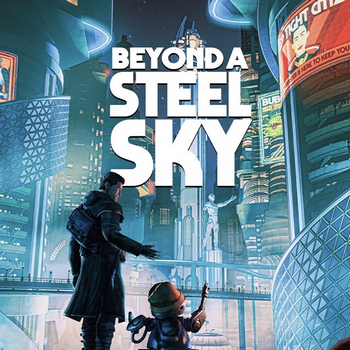 Welcome back to Union City
Advertisement:

Beyond a Steel Sky is an Adventure Game developed by Revolution Software and the sequel to 1994's Beneath a Steel Sky. It was released on June 26, 2020 on the Apple Arcade, with a Steam release on July 16, 2020.

The player continues as Robert Overmann/Robert Foster, though a small amount of time is spent from another character's perspective. The game begins with a child friend of Foster's being kidnapped by mysterious robots. His mission of finding his friend brings him back to Union City, which he finds to be a seemingly bustling metropolis. Evidence of his old friend Joey's work is everywhere, as seen by the pervasive attempts to honor his work in everyday culture.

References to other works of science fiction (and Monty Python) abound, but the game seems to draw most from Neuromancer (Cyberpunk), the Mad Max series (post-apocalyptic Australia), and Demolition Man (the utopian nerfworld.)