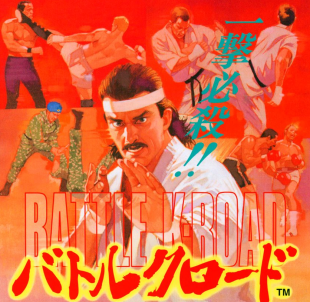 An authentic martial arts experience. At least until you'd get challenged by a bear.
Advertisement:

Battle K-Road is a 1994 2D Fighting Game made for the arcades by Psikyo, a company usually known for specializing Shoot 'Em Up. Allegedly based on the real life K-Road tournament that pitted fighters of various styles together,note It's very likely it was based in the K-1

, a kickboxing promotion popular at the time in Japan. the game aims to provide a more grounded, authentic martial arts experience with fighting styles being recreated out of ones existing in the real world, the lack of projectiles and other outlandish techniques, and the knockdowns causing a position reset like they do in real matches. The game does throw a few wrenches in it's commitment to realism in the form of involvement of Terminator-inspired Cyborgs that do Mixed Martial Arts, to say nothing of that Final Boss.

Psikyo would later take another knack at the Fighting Game genre with Daraku Tenshi: The Fallen Angels.

See also Buriki One, SNK's realistic fighting game that happens to have a similar premise.note Just replace fighting Bears with fighting not-Akuma instead.