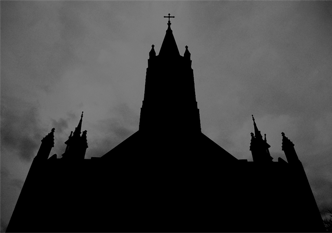 "Now when we enter an old cathedral, we have scarcely a hint of the esoteric meaning of its stony symbolism. Only the general impression forces itself on our mind. We feel the exaltation of the spirit and the abasement of the flesh. The interior of the cathedral is a hollow cross, and we walk here amid the instruments of martyrdom itself. The variegated windows cast on us their red and green lights, like drops of blood and ichor; requiems for the dead resound through the aisles; under our feet are grave-stones and decay; in harmony with the colossal pillars, the soul soars aloft, painfully tearing itself away from the body, which sinks to the ground like a cast-off garment."
— Heinrich Heine, The Romantic School
Advertisement:

So, you're up against the Corrupt Church. You know that they're lying to the people, but no one will listen to you. It's time to take matters into your own hands, storm their base and reveal them for the evil bastards they are.

There's just one little problem. That means you actually have to go in their Church. And that place is scary as Hell itself.

The Creepy Cathedral might not have the vigour of a good old Haunted Castle, and it might not seem to give off that scary dungeon aura... but there's just something about it that makes you think, "Oh, Crap!", the moment you go inside.

Guaranteed to be a Gothic cathedral, in all their pointy towers and Unnecessarily Large Interiors glory. Bonus points if it's accompanied by organ music— which of course will likely be the Toccata and Fugue in D minor. Triple Word Score if it has Ominous Latin Chanting. May have spooky nuns, Sinister Ministers and Creepy Crosses at no extra charge. Other action scenes, especially in works aiming for a gothic vibe, might take place in an abandoned cathedral instead.