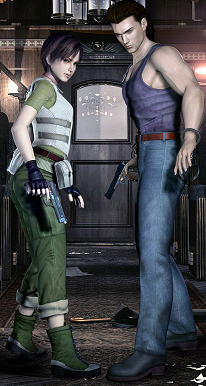 Resident Evil Zero, the fifth main game in the Resident Evil franchise, came out for the Nintendo GameCube in 2002. It serves as a prequel to the original Resident Evil. Capcom initially slated this game for the Nintendo 64 as a follow-up to that system's port of Resident Evil 2, but scrapped the original version of Zero halfway through development when Nintendo unveiled their next console (the GameCube). Capcom made the decision to have Zero Moved to the Next Console instead; at the same time, Shinji Mikami's team began development of a remake of the first Resident Evil for the GameCube. The development of the two projects overlapped, which led to both games sharing many of the same assets (chiefly the character model for Rebecca Chambers). As a result, development on Zero finished only a few months after the release of the remake of the first game. For more than a decade, Zero was exclusive to Nintendo platforms, as its only port was on the original Wii in 2008. However, Capcom released the Resident Evil Zero HD Remaster for the PlayStation 4, Xbox One, PlayStation 3, Xbox 360, and PC on January 19, 2016. A Nintendo Switch version was released on May 21, 2019.

Bravo Team, one half of the Raccoon Police Department's elite S.T.A.R.S. unit, heads into the Arklay Mountains to investigate the reports of recent "cannibal murders", but a mechanical failure brings their helicopter down. The team searches the nearby area and discovers a crashed military police van; it contains the van's murdered drivers and a transport log for former Marine Lieutenant Billy Coen, a convict scheduled for execution after committing twenty-three murders. After Bravo Team separates to find Billy, new team member Rebecca Chambers finds her way to a broken-down train, the Ecliptic Express, in the middle of a forest.

Rebecca has incredible luck for her first day on the job: she not only encounters Billy, but also ends up face-to-decaying-face with scores of zombies, who force Rebecca and Billy to work together in order to survive. The duo escapes the train, then head down the tracks, where they discover the Umbrella Management Training Facility. Their struggle for survival pits them against hordes of Umbrella's nightmarish bio-weaponry and a mysterious young man who bears a grudge against the company.

Zero employs a character-switching system where the player controls both Rebecca and Billy throughout a single playthrough: the player can either have Billy and Rebecca explore the same areas together, with one character controlled by the player and the other by the computer, or split them up. The knowledge of when to stick together or split up becomes integral to solving many of the puzzles. The game also eliminates the series staple of item boxes; Rebecca and Billy can instead drop their items anywhere and later retrieve them from the same locations.