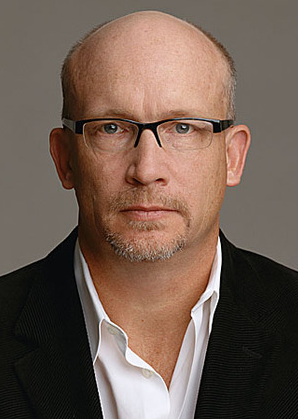 When there's muck to be raked, this is the man you want.
"I think of my films as not necessarily political but more moral. Between my father, my stepfather, and my mother - they all felt pretty passionately about the importance of standing up and doing the right thing, and none of them were suck-ups. What motivates me is usually abuse of power."
Advertisement:

Philip Alexander "Alex" Gibney (born October 23, 1953) is a documentary filmmaker and producer. His production company, Jigsaw Productions, is based out of New York City. While arguably not as recognized a name as Michael Moore or Errol Morris, Gibney has had increasing success since 2005 creating many highly-acclaimed documentaries on a variety of subjects.

His first film to receive wide-spread public exposure was Enron: The Smartest Guys in the Room, which chronicled the rise and fall of the Houston, TX commodities broker Enron and of its corrupt chief executives, Jeffery Skilling and Kenneth Lay. The film, based on the book of the same name written by Bethany McLean & Peter Elkind

, was nominated for an Oscar. note  It ultimately lost to March of the Penguins.

Some of his other note-worthy films and TV series include:

Common tropes found in the films of Alex Gibney: