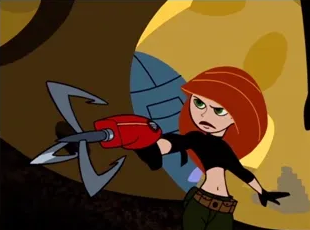 The Grappling-Hook Pistol is an essential item for any aspiring Badass Normal, Cape, or secret agent. This handy bit of Applied Phlebotinum can deploy a grappling hook with laser-guided precision to a secure holding point at the top of any tall building, allowing its user to climb with ease. Particularly spiffy examples are equipped with motors, and can function as field-expedient elevators as their users hold on for dear life. It can also be used to implement the Building Swing, though its primary function is usually just for climbing. It also lends itself to You Will Not Evade Me when shot directly at someone.

In settings that predate firearms the alternative is the grappling arrow used by bow wielding protagonists. While it can be an arrow with a grappling hook more often it's just a standard arrow with a rope tied to it.

The Grappling-Hook Pistol is generally a fairly bulky item for a handheld pistol, though unreasonably small for the length of line and hook firing charge that it contains. Its limited utility makes it a special-purpose item that the hero is unlikely to carry... but it generally conveniently appears from hammerspace when it is needed.

The hooks themselves are Plot-Sensitive Items, capable of all three variants of Instant Knots - latching onto, wrapping the cable around, or piercing their target, depending on the needs of the script. The wrap-around cable is a strange effect, as it always attaches to the anchor point snugly enough to support whatever is on the other end of the cable on the first try. If the cord can automatically retract, the person can just hold on with one hand with inhuman strength to get pulled up; this is especially dramatic if they're holding someone else with their other arm. It's also very handy when you find yourself or an innocent civilian falling, but let's hope the cord has some elasticity.

Grappling guns actually exist (see "Real Life" below), but the real ones are somewhat larger than depicted on screen, especially if not base-fired only (though recent designs allow more compact systems). As in "pneumatic Grenade Launcher of load-bearing design with built-in reel of strong rope" — though strong crossbow could work too. Hook is massive, rope adds a lot of drag, so the launcher's power (and recoil) should be considerable. See also Harpoon Gun.

Partially busted by the MythBusters in 2007. (Because the aforementioned size makes them too large to be carried around on a superhero belt.) An ascension device was built that essentially fit the size, but including the launching mechanism would have made it simply too bulky. Also, they couldn't get the grapple to consistently attach itself to the intended target.

A variation — also partially busted by the Mythbusters — has the grappling hook attached to the hero's (or villain's) car, for turning corners at high speed. There is no line capable of withstanding the sheer force that goes into a car turning at high speeds — yet.

Carolina improvises a flail from a grenade and a grappling-hook gun.

Carolina improvises a flail from a grenade and a grappling-hook gun.