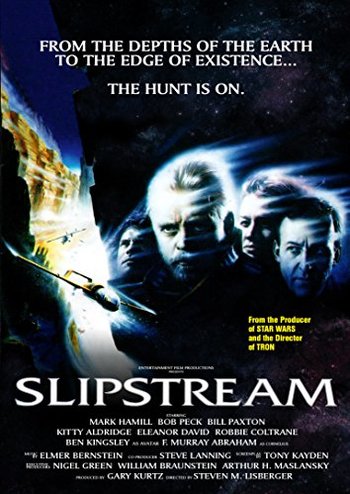 Across a land shaped by earthquakes and environmental change flees Byron (Bob Peck), a fugitive who is more than he appears. He is pursued by Will Tasker (Mark Hamill) and his partner Belitski, two bounty hunters flying the permanent world-encircling wind called the Slipstream. Enter flyer/trader Matt Owens (Bill Paxton), who steals their captive and takes Byron on a journey through a world torn between a dying past and the evolving future.

Directed by Steven Lisberger (who produced TRON) and produced by Gary Kurz (The Dark Crystal). Music by Elmer Bernstein.

Not to be confused with the 2005 or 2007 movies also called Slipstream.