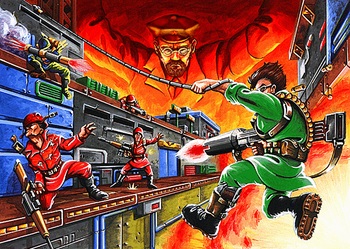 Our hero Ladd Spencer, as he fights the evil imperialistic forces of Master-D (clearly not Hitler with a fake beard and sunglasses.)
"They lost their hero to the enemy. They went looking for the perfect soldier to rescue him. They found some guy who couldn't even jump."

"Let me tell you about the man I met when I was still young..."
Advertisement:

Bionic Commando is a platformer series by Capcom. The original title was an arcade game released in 1987, starring a soldier who must fight his way into enemy territory to destroy their missiles. At first sight, Bionic Commando seemed like a conventional platformer, but there's a catch: there is no jump button. Instead, the protagonist is equipped with a grappling hook to swing and climb places. The game was marketed outside Japan as a sequel to Capcom's earlier arcade game Commando (hence the similar titles), to the point that the English promotional flyer claimed that the game's protagonist is none other than Super Joe himself, although the two games were not connected... At first. It was ported to a variety of home computer platforms following its release.

A follow-up for the NES was released in 1988. The console sequel not only refines the wire swinging gimmick of the arcade game, but also fleshes out the rest of the game with an added emphasis on exploration such as the addition of a life bar that the player can extend through bullet collecting, the procurement of items and weapons (which are chosen at the start of each mission) which help facilitate the player's mission, and the ability to communicate with friendly agents and wiretap enemy conversations for additional information. The game now starts in an overworld map in which the player uses an helicopter to not only transport the protagonist to enemy areas in any order (although some stages required proper equipment in order to be explored), but also visit neutral zones to meet up with allies and enemies alike, and even engage against enemy convoys through optional top-down scrolling stages akin to the original Commando.

The NES Bionic Commando also featured a much more fleshed out plot than its arcade predecessor. Rad Spencer (also known as Ladd Spencer in the original translation, later renamed Nathan “Rad” Spencer), a bionic arm-equipped One-Man Army working for The Federation, is sent to infiltrate Imperial territory in order to rescue his missing comrade Super Joe (fortifying the title's otherwise tenuous ties with the original Commando) and find out what he knows about the stolen top secret Nazi project codenamed Albatross. After rescuing Joe, Spencer discovers that Project Albatross is an abandoned weapon that the Imperials now seek to complete by reviving the project's originator - Hitler himself (hence the game's Japanese title, meaning Resurrection of Hitler).

All references to the Nazis were edited out from the NES version's overseas release, with Hitler himself being renamed Master-D, although the controversial dictator's likeness was left unchanged (making it obvious who he is meant to be), along with a particularly gory death sequence..

Despite this, the NES version of Bionic Commando was a cult success and the game inspired a few remakes and successors throughout the years, including a book in the Worlds of Power series, most notably a 2009 sequel again titled Bionic Commando for seventh generation consoles, which was developed by the now-defunct Sweden-based developer GRIN. The 2009 incarnation of Spencer also appeared as a character in Marvel vs. Capcom 3 and Marvel vs. Capcom: Infinite, with the Rearmed rendition as an alternate DLC costume in the former.