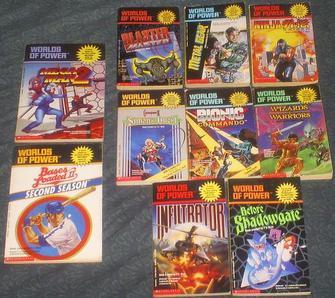 Worlds of Power was a series of novelizations of Nintendo Entertainment System games published in the early 1990s by Scholastic Books. They were written by several authors using the pen name "F.X. Nine". The books averaged about 120 pages long, and featured (usually very basic) hints for the featured game as an added incentive, either in a trading card on the inside cover or in mirror writing at the end of each chapter. At the end of each book was a list of recommendations for other books the author "thought you might like".

The quality of the books varies, as does the faithfulness to the game's plot. Blaster Master and Bionic Commando are generally regarded as the best adaptations, with the former even becoming canon to the game series.

There were eight books in the series, each named after the game on which it was based:

There was also a Junior Worlds of Power series, aimed at an even younger demographic. They were physically bigger, but only about 70 pages long. There were only two books in the series: Mega Man 2 and Bases Loaded II.