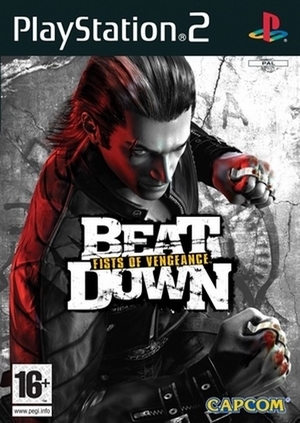 Time to open the gates of hell!
Advertisement:

Beat Down: Fists of Vengeance is a Beat 'em Up by Capcom. It hit the Xbox and the PS2 in the 2005, and had a very interesting premise. The game is a Wide-Open Sandbox, a Fighting Game, and a Beat 'Em Up that relies heavily on RPG Elements. The player is able to do some Level Grinding with his chosen character, highly customize him/her by changing everything about him with cosmetic surgeries, buying tattoos, changing his/her hair, his/her clothes and even adding/removing features like facial and body hair (making him/her a real Virtual Paper Doll). There's also loads of side quests and over 30 recruitable characters that can help you around by filling your party and being sidekicks just for the sake of it. These allies also gain levels, and some have specializations and different (but limited) fighting styles. For example, Martial Artists can teach you moves for some cash, Pickpockets can steal, and car thieves can hijack cars parked on the streets to give you a quick trip. You can also interrogate, rob, and even brutalize the characters in the game to a pulp using the option "Beatdown" for no other reason than really being faithful to the game title.

The plot is about five mob soldiers from a Wretched Hive called Las Sombras who got set up by their own organization. In the ensuing chaos, they get split up and try to build up a network of informants and underlings to get revenge.

The Five Player Characters are: