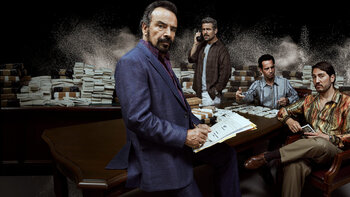 The Gentlemen of Cali.
Advertisement:

The Mafia... BUT HISPANIC!

In the underworld, there are several factions, usually based on location and ethnicity. The cartel is an umbrella term for many mafia-like groups based in Latin America. In real life, these cartels are behind trafficking cocaine, and occasionally arming and supporting various armed groups, both revolutionaries and counter-revolutionaries. Cocaine supplied to the US is refined to crack and sold by Gangbangers. Sometimes, they will even engage in Human Trafficking especially when they are the ones smuggling people into the United States.

One of the most infamous cartels was the Medellin cartel, and its leader Pablo Escobar,

◊ who ran most of the cocaine trade in the Americas during the '80s and '90s until he was taken down by the Colombian Search Bloc with the assistance of the United States. Escobar's power and reach was so big during his heyday that he was (and still is) referred to as the "world's greatest outlaw." Additionally, the financial magazine Forbes described him as the "world's richest criminal."

Even today, when most people think of Colombia, they think "Cocaine Land" (or should we say, ''País de la Cocaína?" Because "cocaína" is a really common word when discussing these people).

The cartel was a popular villain in fiction during the '80s and '90s, when the drug trade made the headlines big time. It made a comeback in the 2010s with the Mexican drug war, which saw the rise of a new breed of brutal cartels that became infamous for their graphic executions and use of propaganda to recruit new foot soldiers and scare their enemies, so expect to see these guys as popular antagonists for the foreseeable future.

For their adversaries and affiliates, see The Mafia, The Mafiya, Kosher Nostra, Yakuza, The Triads and the Tongs, and Gangbangers. See also The Syndicate. Usually the Ruthless Foreign Gangsters in works set during the 80's, and occasionally engaged in a Mob War with another organized crime group.

Not to be confused with literal cartels in the sense of small groups of large companies conspiring to manipulate the market, though that's the source for their name, since each group tries to corner the drug market by violence.