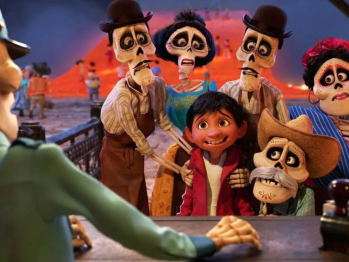 Originating in Mayan traditions that survived the Spanish conquest, Calacas are representations of the dead celebrated in Mexican art and holidays, particularly Dia de los Muertos (Day of the Dead).
Advertisement:

If you find yourself in a Mexican-inspired Spirit World, chances are you'll run into these as living skeletons. For them being dead isn't all that bad at all, and in fact is not much different from being alive. Their "lifeblood" is tied to their living descendants' memories of them in the real world. They experience a final death when they are completely forgotten by the living. Until then, death is seen as a natural and joyous part of anyone's life cycle.

They are often depicted in festive colors, playing instruments, and surrounded by leaves and flowers. Calacas iconography in art, facepaint, costumes etc. is also fairly common. These dead can not only dance, they tend to be very good at it, and often play instruments as well.

"Look at all the dead stuff!"

Manny and Frida enter the Land of the Dead.

"Look at all the dead stuff!"

Manny and Frida enter the Land of the Dead.