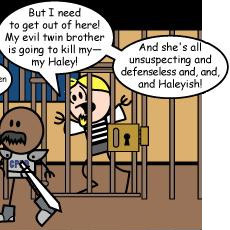 The Hero feels strongly about his Protectorate. Obviously, imprisonment will prevent him from doing any protecting, and often goes hand-in-hand with situations where the protectorate is in grave danger. This horrifies him — often more than an impending execution, even. Partly because, being in prison, the Protectorate could be facing any number of dangers without his knowledge.

Because Men Are the Expendable Gender, more likely to be a man anguished over a woman (or child) than vice versa.

This allows even a Lawful Good character who would normally insist on Self-Restraint to break prison, since it's not for his own sake that he wants out. For any character, it provides a powerful motive to escape, and so it invariably leads into the Great Escape.

From the Protectorate's POV, if that's shown, this may be Deus Exit Machina followed by Deus ex Machina, although the prisoner can be considerably less powerful than that, or even the character he's trying to aid.

Not to be confused with someone who protects people while they're in prison.