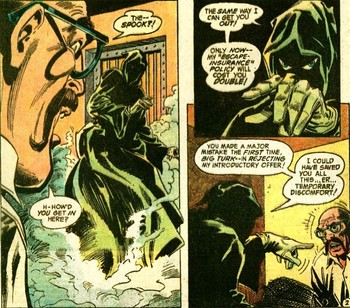 So you have a convict. They have been caught, and they are going to the slammer. Justice has been served. Right?

If the convict is a Prison Escape Artist, then absolutely not. To them, prisons might as well be made of cardboard. They can wiggle their way out of anything. Yes, even prisons that are supposedly impossible to break out of such as The Alcatraz. If you build a Tailor-Made Prison just for them, it will fail. Several methods can be used to achieve their escapes, including digging their way out, making use of air vents, and having some friends come in disguised as guards, among others.

Needless to say, they often play a role in a Great Escape, and may lend a Wrongly Accused protagonist a hand if they aren't evil and happen to like said protagonist. If they never get caught again, they might organize escape attempts for other prisoners. Compare and contrast Play-Along Prisoner, as a Prison Escape Artist doesn't necessarily have to be able to escape at any time. Some may just seek out opportunities.

Note: This trope is not simply someone who escapes from prison. This is someone who has escaped and/or has helped others escape more than once, either prior to or during the story.

The world's greatest thief's MO is to break all lights in his cell, then escape. (NOTE: The language of this clip is in Russian.)

The world's greatest thief's MO is to break all lights in his cell, then escape. (NOTE: The language of this clip is in Russian.)