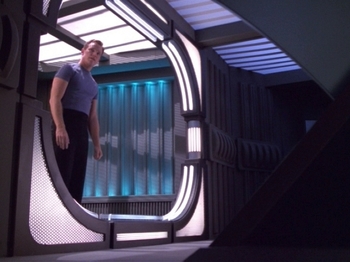 You know, if he watched eight episodes a day, Tom could finish all of Friends while he's in there.
"Lieutenant Thomas Eugene Paris, I hereby reduce you to the rank of ensign. And I sentence you to thirty days solitary confinement."
Advertisement:

Tom Paris is demoted to Ensign and confined to the brig for thirty days. While there he dictates a letter to his father about how this came about. It started when Voyager came across a celestial body that is essentially an ocean held in a planetary shape by a containment field. After making contact with the world's people, the Moneans, the crew learns that the world is losing its water and that the Moneans themselves are causing it with their oxygen-mining operations, and that if they don't cut back or cease, they could lose their world altogether. Paris wants to help the Moneans stabilize their world, but their ruling council and Captain Janeway prevent him from doing so, with the latter citing the Prime Directive. Paris decides to go against the captain's orders and steals the Delta Flyer, taking one of the Moneans with him to destroy one of the oxygen-mining refineries so that they could have time to rebuild it better. Captain Janeway finds out what Tom Paris is doing and stops him from achieving that purpose, which leads to his demotion and thirty days of incarceration.