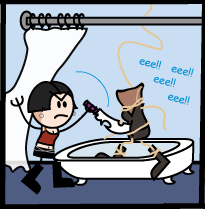 "This is gonna turn out just like those cheesy teenage gore flicks. It's a good thing there aren't any showers around here."
— Andy, Calvin and Hobbes: The Series, "Dark Laughter Part 1"
Advertisement:

One of the most famous movie scenes of all time and perhaps the most frequently spoofed, parodied, imitated, plagiarized, and referenced one. Alfred Hitchcock's movie Psycho (1960) has become infamous for the scene where a woman (Janet Leigh) is murdered while taking a shower. Back in 1960 audiences were utterly shocked when they saw this scene for the following reasons:

Of course, nowadays, the shower scene is a case of "Seinfeld" Is Unfunny. People have seen this scene parodied so much that there's a sense of overkill and thus the shock value of the original is lost. In fact, the Psycho Shower Scene Parodies themselves (always complete with "Psycho" Strings) have transformed into uninspired stock parodies that leave an audience sighing: "It's Been Done." Subtrope of Toilet Horror.

If a character is attacked while bathing or showering without parodying Psycho, see Deadly Bath.