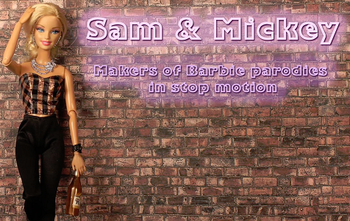 Sam & Mickey, also known as Samantha Clutsom and Michelle Weston, are two Australian women who create adult-targeted Stop Motion comedies about Barbie and their other dolls. Their videos, the first of which debuted in 2010, use Comedic Sociopathy to contrast Mattel's perfect, angelic image of Barbie with that of a Broken Ace: A deceitful, alcoholic, sex-driven egomaniac struggling to raise four daugh-er, "little sisters", and maintain a stable romance with her airheaded on-again, off-again lover Ken, in between such jobs and activities as running a book club, providing "Love Triangle Therapy" to other toys, and headlining the reality show The Real Housewives of Toys 'R' Us.

in the middle of every month, with an additional chapter to one of several miniseries appearing every week starting December 2017. Tropes related to recurring characters go on the Character Sheet.

The level-headed Deborah somehow joins in on Barbie's and Ken's live-air sexcapades.

Example of:
Not So Above It All

The level-headed Deborah somehow joins in on Barbie's and Ken's live-air sexcapades.