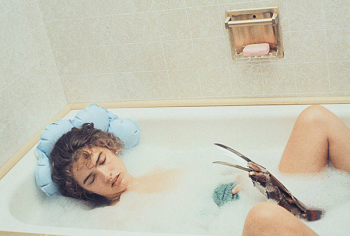 Yet another reason not to fall asleep in the bath...
"Oh, no! It’s dark in here and here I am in the shower! Alone! I’m so naked and vulnerable!"
— John, John Dies at the End
Advertisement:

Taking a bath is risky business, at least in entertainment media. Nine times out of ten, either something happens to interrupt the bath, or you die. This is the latter.

In part, this is due to the Law of Conservation of Detail. The only reason to show somebody doing something as mundane as bathing is because something narratively important is going to happen during that bath — unless it's just for Fanservice.

And it isn't hard to see why the bathtub or shower would be such a common place for murderers to show up. Bathing is when you're at your most vulnerable; relaxed, alone, naked, possibly with water in your eyes, in a small room that usually has one door and no windows.

Or, alternatively, it's a Bath Suicide; a time that should be relaxing and pleasant becomes suddenly awful.

Whether murder or suicide, there may be an Electrified Bathtub involved. The "Psycho" Shower Murder Parody is a particularly common example of this trope — or a subversion, depending on the humor content. A Deadly Bath will very commonly lead directly to Blood Is Squicker in Water. Paranoid and/or Genre Savvy characters may feel they Can't Bathe Without a Weapon in anticipation of this trope.

Whenever it's a killer or monster that's the cause of death, the victim is always a woman for some reason.

A Candlelit Bath can easily turn into one of these when it isn't turning to romance.

Not to be confused with Blood Bath.

Victoria is almost strangled by an invisible attacker while bathing.

Victoria is almost strangled by an invisible attacker while bathing.