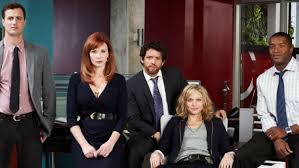 A Canadian crime/mystery drama which started running in 2013, set in Vancouver, British Columbia. It blends elements of Police Procedural and Criminal Procedural in a unique format: the audience already knows the murderer and the victim; what the audience learns, through a combination of the unfolding investigation, conducted by Detectives Angelika "Angie" Flynn and Oscar Vega, as well as flashback sequences, are the events leading up to the murder and the motive for that murder.
Advertisement:

The series also got picked up by ABC for a summer run of its first season in 2013, but after poor season 2 ratings in the United States, ABC stopped airing the show. Since then, however, it was picked up by USA Network and they aired seasons 3 and 4 for American viewers. It has since been made available on DVD and through iTunes.

There is a parallel show of sorts, the TV series "The Dark Corner", which fits roughly sometime within the period of Season 1.

Be aware that possible episode plot twists or reveals may not be spoiler-tagged unless they occur in Season 4, or would spoil major arc-based reveals in Seasons 1 through 3.

The motives for these tropes are as follows:

Vega: No, the packaging is evidence. The popcorn is delicious.