Death by Falling Over 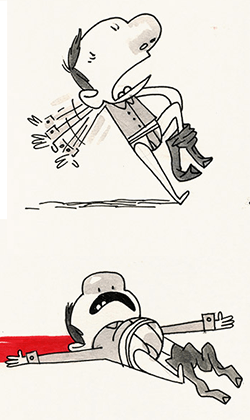 Angus: Lads, say a prayer, I'm afraid Harry Beaton is dead!
Tommy: Looks like he fell on a rock and it crushed in his head.
— Brigadoon, "The Chase"
Advertisement:

Someone pushes someone over, they bang their head on something and are killed instantly. This seems to be the best way to pull off involuntary manslaughter without making the guy who did it unsympathetic.

Depending on the context, death by falling over may be seen as a particularly "un-dramatic" way to check out. It's fine if the show's realistic (or if the focus is on the 'death by accident' plot), but try to write off a major character or villain (particularly in an action series) in this way and the fans will see the invisible bridge that knocked him over. It just can seem a little anticlimactic in fiction.

Truth in Television, since it's actually not uncommon for people to die in this way, especially if stairs are involved. Aside from someone being pushed, a common example is drunk people not protecting themselves when they fall over, leaving their heads to smash uninhibited into concrete. The main risk is that a blood vessel will rupture and bleed into the brain or skull, causing pressure to build so the delicate tissue doesn't get enough oxygen. Depending on the severity of the bleed, it can take anywhere from minutes to hours for death to occur. A person with a slow bleed may even be able to function normally for a while, until the headache and other symptoms overwhelm them. This aspect also means that in quite a few cases, the person's life can be saved if they get medical attention quickly enough, so if you see this happen in real life, seek immediate medical attention, as every minute matters.

See also Instant Death Bullet, Railing Kill, Disney Villain Death, Made of Plasticine, and Staircase Tumble. May or may not overlap with Undignified Death and Dropped a Bridge on Him. Contrast Hard Head, Tap on the Head.