Comic Book / The Brave and the Bold 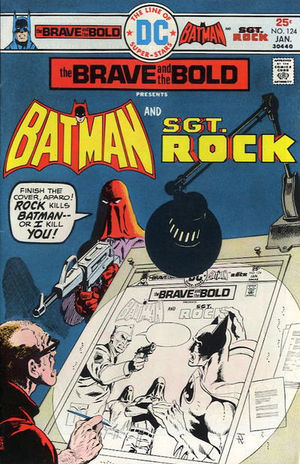 Issue #124, where the villains attack Batman by attacking the comic's writer and artist... Just a normal day for Batman!
Advertisement:

The Brave and the Bold was a DC Comics Silver Age comic book series that ran from 1955 to 1983. It is best known for its incarnation as a superhero team-up comic, in which various DC superheroes joined forces with each other (but mostly with Batman) to fight menaces too big to face alone.

The original concept for The Brave and the Bold was an Anthology Comic of historical adventure stories, featuring the likes of Robin Hood, the Viking Prince, and the Silent Knight. From issue #25 it became a try-out title for new potential series, beginning with the debut of the original (pre-Amanda Waller) Suicide Squad, and going on to introduce the Justice League of America, Cave Carson, the Silver Age Hawkman and Hawkgirl, and "Strange Sports Stories", all of which went on to achieve at least occasional recurring status.note Even Strange Sports Stories, which was a short-lived anthology series in the 1970s.

It became a team-up comic with issue #50, which featured an alliance between Green Arrow and the Martian Manhunter. (Although with occasional lapses back into being a try-out title, such as #57, the debut of Metamorpho.) Issue #54 featured a team-up between Robin, Kid Flash and Aqualad, which led a few issues later to the formation of the Teen Titans. Batman appeared in the title for the first time in #59, teaming up with Green Lantern, and from #67 on, he was in every single issue. The series ended with its 200th issue, a double-sized special featuring a team-up between Batman and ... Batman.

The tone of the team-up stories could vary considerably. Some were straightforward Batman stories (you wouldn't think a crossover between Batman and House of Mystery would work, but in #93 Denny O'Neil made it), but many, to put it bluntly, carried the torch for the kind of Silver Age wackiness that made Superdickery what it is today, into the Bronze Age. (Exhibit A: #108, in which Batman accidentally sells his soul to the Devil to save a child, then teams up with Sergeant Rocknote  With absolutely no explanation of why Rock is still a young-ish man in 1973 who reveals the "Devil" is actually Hitler! But also actually the Devil!). Most of these (and the majority of the series, in fact) were written by "Zaney" Bob Haney, the man so famous for his cheeky defiance for continuity, common sense and logic that even his editors once claimed his stories might take place in their own alternate universe, "Earth-B(ob)". Needless to say, Haney's stories have developed their own fans, not hindered by the fact that he worked with Neal Adams and Jim Aparo doing career-best work.

A limited series titled The Brave and the Bold, by Mike Grell and Mike Baron, ran from 1991 to 1992 and teamed up Green Arrow, The Question, and creator-owned character The Butcher. A new The Brave and the Bold ongoing ran from 2007 to 2010, which removed Batman's ex officio status and returned to being a series where any combination of heroes could team up. The spirit of the Silver/Bronze Age Bob Haney original is arguably better carried on and very faithfully adapted by the animated series Batman: The Brave and the Bold.

The Silver/Bronze Age version of the comic provides examples of:

The 21st-century version of the comic provides examples of: