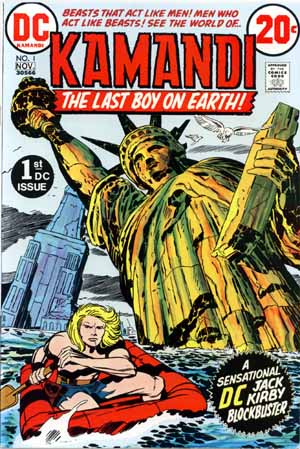 You know there's been an apocalypse because Lady Liberty is sinking.
Kamandi, The Last Boy on Earth was a science-fiction comic book series published by DC Comics. The series was first published throughout the 1970s and its characters have appeared in various other comics since.
Advertisement:

After the success of Planet of the Apes (1968), DC Comics editor Carmine Infantino asked artist/writer Jack Kirby to create a series with a similar premise after failing to secure the rights to that series (Marvel Comics got it instead). Kirby had never actually seen the film, but took what little he did know and combined it with some of his previous sci-fi one-shots (namely The Last Enemy

) and a few unused ideas. Thus Kamandi was born, a title which — unlike most other comics Kirby created for DC — lasted for many years, though Kirby would leave the book about two-thirds into its run.

In the original series, a mysterious incident known only as "The Great Disaster" caused the collapse of human civilization. Fast-forward a few centuries and a human boy is living with his grandfather in a bunker called "Command-D" somewhere near New York City. When his caretaker dies, the young man — named after the place — sets outs to find more people. What he discovers is that most humans are now primitive and unable to speak, while many animals became humanoid in form and gained human-level intelligence; the latter the result of an experiment that was being carried out shortly before the Disaster. Naturally, this means humans are now treated as animals, and the animals have developed their own civilizations that were suspiciously similar to ancient human ones (e.g., the tigers are The Roman Empire).

All the animal races are also at war with each other, scavenging and fighting for resources among the Ruins of the Modern Age, with the main conflict being between the Tigers and the Apes. The plot followed Kamandi's attempts to restore humanity's sentience in this new era of Earth A.D. while avoiding the various animal armies. Over the course of his journey, he is able to befriend individuals such as the science-minded hound Doctor Canus, as well as encounter some mutated humans who are still capable of human reasoning and speech.