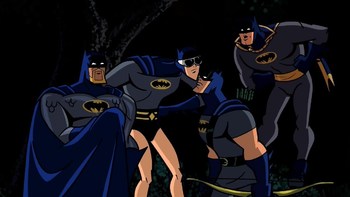 Generally it works better when only one person is doing the impersonating.
Advertisement:

A secondary character of some importance in the world at large has disappeared or been rendered incapable of performing his usual duties: they've might have been kidnapped, fallen seriously ill, suffering from an injury, or have run away, or they might have even died. Alternatively, they might need to be in two places at once to satisfy conflicting commitments. Someone else (usually one of the program's leads) finds themself dragooned into service; they must impersonate the missing person during some critical event or meeting... or for much longer.

While sometimes the impostor receives sufficient briefing and/or real-time aid to bring off the deception seamlessly, it's more common for time or other constraints to prevent this seemingly necessary step. In a comedic setting, naturally, Hilarity Ensues; in more dramatic locales, the results can be anything from painfully embarrassing to potentially fatal.

Eventually the missing person (if they aren't deceased) is recovered, but often only after they learn An Aesop about some aspect of the world which was hidden from them in their usual role.

Compare with Prince and Pauper and Decoy Leader. Closely related to El Cid Ploy and You Will Be Beethoven.

Usually — but not always — involves an Identical Stranger. Depending on whether the impersonated individual's identity is known, it may overlap with Masquerading As the Unseen. See also The Beard, Body Double, Costume Copycat and Mock Millionaire.

Alternative Title(s): Guise Will Be Guise