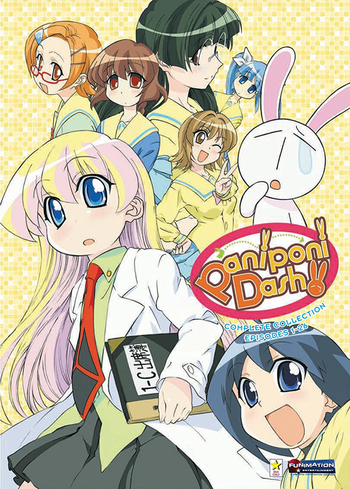 Rebecca Miyamoto. Born of an American father and a Japanese mother. Graduated from the Massachusetts Institute of Technology, the youngest graduate in the school's history. She then returned to Japan to become a high school teacher. However... she was only 10 years old at the time!
Advertisement:

That's just the beginning. Rebecca's class consists of six students and several cloned extras, and she also has to deal with the general mayhem that ensues at Momotsuki Academy. Did we mention that she's accompanied by a mopey, luckless rabbit named Mesousa, and is being monitored by aliens? Then there's the strange cat-like creature who claims to be a god, likes to hide in vending machines and keep the sodas warmed-over with his body heat, and seems to be following Rebecca and her class...

It's a Studio Shaft, reference-a-minute, madcap comedy series best described as early Negima! Magister Negi Magi meets Excel Saga. It was based on the manga Pani Poni by Hekiru Hikawa, which was serialized in Square Enix's Monthly GFantasy magazine from 2000-2011. The anime was originally licensed by the fine folks at ADV Films, and is now licensed by FUNimation.

Becky gets one at the worst time possible.

Becky gets one at the worst time possible.