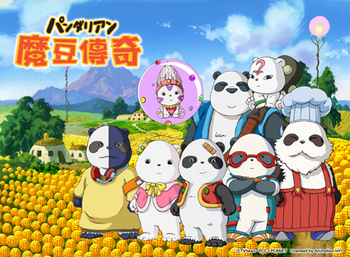 Panda-ing to the Audience at its finest.
Advertisement:

Pandalian (also known as Panda Monium in some countries— no, not that Panda Monium) is a 26-episode multinational-developed animated series with characters created by Taiwanese company TV Bean, animated by Fuji Creative Corporation and Planet Inc. with Nelvana and Funimation joining hands in sales. The series is set in Pandasia, a ring-shaped planet in a fictional reality which is inhabited by pandas.

Enter Toby, a working-class country boy who lives with his two brothers and grandmother, as well as his pet Didi. One day, after witnessing a meteor falling to his village, Toby meets a fairy named Mi— who turns out to be encased inside the 'meteor'. This fairy, much to his confusion, persuades him to save the world, which is actually at a threat of the evil King Audie of the Darkness Castle. Toby initially refuses the offer, but his determination to save the people he loves causes him to eventually take it, and little did he know what adventure his choice brings him.