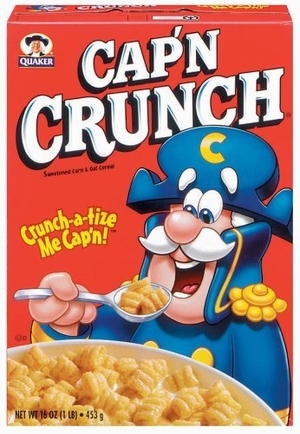 Set course for a balanced breakfast. Engage!
"Here it is shown how the leprechauns are first flayed and then pulped to be turned into the marshmallows. Off to the side are waist-high piles of abandoned little green hats that will be shipped back to Ireland under international treaty.
'Am I the only one who finds this a little bit creepy?' I ask aloud. Elayne ignores me.
'You can have your picture taken and put on a box of Wheaties,' she says.
'That's insane," I say. 'I can't masturbate to a picture of myself. Where are the Mary Lou Retton boxes?'"
— The Areas of My Expertise, by "the PC".
Advertisement:

If you were looking for our lovable mascot, please see Trope-tan.

A character, animal or animate object (see Everything Talks) which theoretically represents all that is good and attractive about a product, and which may act as a spokesman for it. Sometimes it may be an anthropomorphized version of the product itself, or of some primary component in it.

Mascots were almost mandatory in the early days of advertising on radio and television, but are far less common today, probably because of the growing sophistication (or cynicism if you prefer) of the audience coupled with the perception that they are, really, rather silly. Outside of advertising aimed at children and/or breakfast foods, a Mascot in a modern commercial is as likely to be a subversion as not.

An exception would be Japan, where everything has a cute mascot nowadays. EVERYTHING.