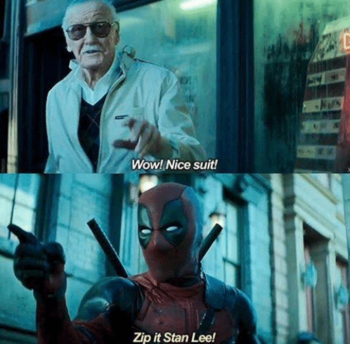 He didn't even create him, though...
"I'm a frustrated actor. My goal is to beat Alfred Hitchcock in the number of cameos. I'm going to try to break his record."note And in fact, he did. Hitchcock made 40 cameos across his 54 surviving films, while Stan Lee's number of cameos made across all media by the end of his life was 60.
— 2006 interview
Advertisement:

The late comic book creator Stan Lee always enjoyed making cameos, both in the comics themselves and in related media. He had contractually-obliged cameos in almost every movie based on one of his works, and usually appeared in Marvel-based movies he wasn't contractually obliged to get cameos in, including works featuring characters he didn't even contribute to create or shape. It's been joked that he had the superpower to appear in any media, and some non-Marvel related works didn't hesitate to play with this and cast him.

There have been a few posthumous tributes to him since his passing, and this trend might continue in the future.