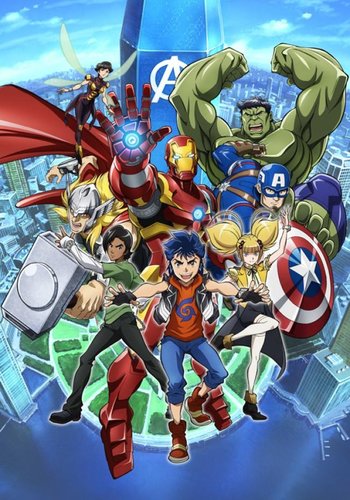 The series follows Makoto, Adi, and Chloé, three superpowered teenagers who have been raised by HYDRA to believe that they are being trained to become superheroes and that the Avengers are villains. The three have been genetically modified by HYDRA, resulting in each gaining unique superhuman abilities.

However, the trio eventually come to realize HYDRA's intentions and decide to flee. During their escape attempt, they encounter the Avengers and help them stop HYDRA's plans. Realizing the kids have potential, the Avengers agree to take them in and train them to become superheroes, dubbing them the "Future Avengers".

The series is a kind of Spiritual Successor to Marvel Disk Wars: The Avengers, though the two anime are otherwise unrelated. The series began airing on the Japanese satellite channel DLife on July 2017 and ran for 26 episodes. A second season aired in 2018.