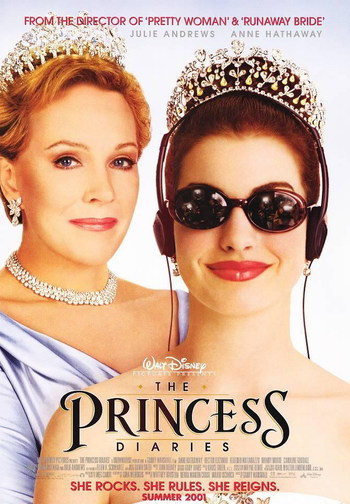 She rocks. She rules. She reigns.
Clarisse: You are Amelia Mignonette Thermopolis Renaldi, princess of Genovia.
Mia: Me, a princess? SHUT! UP!
Advertisement:

Based on the book series of the same name, this 2001 Romantic Comedy stars Anne Hathaway in her Star-Making Role and Julie Andrews in her first Disney film since Mary Poppins.

Unpopular San Francisco high school student Amelia "Mia" Thermopolis (Hathaway) learns from her grandmother Clarisse (Andrews) that she's the princess of small European monarchy Genovia. Clarisse is currently serving as regent, but Mia will eventually have to rule. Mia struggles with her newfound status in every way, from learning royal manners, to navigating her high school (including managing her crush on popular guy Josh (Erik Van Detten) and dodging alpha cheerleader Lana (Mandy Moore), to her longtime friendships with siblings Michael and Lilly (Robert Schwartzman and Heather Matarazzo). Fortunately, along for the ride are security chief Joe (Héctor Elizondo) and her trusty cat Fat Louie.

While most of the core plot from the first book remains, major changes were made to some plot points and characters or some of them were removed entirely. The 2004 sequel, The Princess Diaries 2: Royal Engagement, is in fact an entirely new creation: the only plot point from the books being used was Mia's mother marrying her teacher and having a baby with him. A 2-movie collection, containing both films, was released on Blu-ray Disc on May 15, 2012. The possibility of a third film has been buzzing since 2016.